When I initially bought this book, I thought it was going to be a really useful book with tips on how to use Facebook effectively in a church environment. It wasn’t anywhere near my expectations, but that’s more a comment on me not reading the blurb properly than it is on the book. 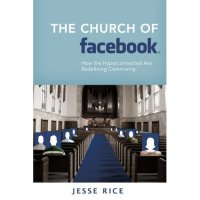 In fact, this book is a very good sociological interpretation of how Facebook has shaped and redefined our society. It is written from a Christian perspective, though that has more to do with the fact that the author is a Christian than any actual slant pushed by the book itself. If anything, you might be able to say the author has used some homiletics tips in how he has shaped the book.

The book opens with a vivid description of the Millennium Bridge in London, and the problems that plagued it’s opening. This sets the scene for the entire book, as Rice refers back to it in every chapter. Similarly, many of the illustrations he uses he refers back to later in the book. This series of connections highlights to me the point he is trying to make, about how Facebook has reshaped how we see connections in our society.

Rice sets the book out in three sections (homiletics again – everyone loves a three-point sermon): first, describing how Facebook became so popular; secondly, how that popularity has changed the way society connects and interacts with each other; and finally, how we can adapt our behaviours to “navigate the shifting social tides”.

Rice concludes the book with some practical advice on how to get the most out of Facebook, highlighting three things (there’s that homiletics again): intentionality, humility and authenticity. He suggests that we be intentional in how we use Facebook, being aware of the many repercussions of unintentional social media use, and instead “turning our attention toward the quality of both our in-person and online relationships rather than just the quantity.” He suggests that we be humble, showing respect and dignity to every single person. Finally, he suggests that we be authentic, being true to who we are and not living a life online that is different to who we are offline.

And with that, I think I got exactly what I was looking for – in that the best way for a church to use Facebook is to be intentional, humble and authentic.