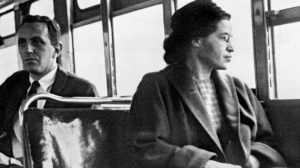 It’s December 1st, 1955. A sensibly dressed woman in her forties gets on a bus in the early evening. Despite having spent all day bent over an ironing board in the basement tailor shop at Montgomery Fair department store, she carries her swollen feet and aching shoulders erectly. She sits in the first row of the Coloured section on the bus, and watches the bus fill with riders. Until, that is, the driver orders her to give her seat to a white passenger. Her response was just a single word, but that word was filled with so much meaning and started something that would only be realised later. She said, “No.”

The Story goes that Rosa Parks was tired of being pushed around and decided to sit down. For me, this is part of the story that resonates with me. After years of fighting for the rights of Asylum Seekers and Refugees in Australia, Christian leaders are tired. They have worked, and continue to work the political process. They have written letters, signed petitions, visited politicians on all sides of the spectrum, and still our nations treats those in the most need in ever increasingly worse ways. We are tired of fighting and getting nowhere.

We sat, asking the Senator to release a statement saying that it was abhorrent that there were 127 children in immigration detention. We offered for him to be a hero to these children, insisting to the Prime Minister and Immigration minister to release them and their families immediately. But we received no response. So we sat, and we prayed, and having received no response, we were eventually arrested.

So we sat in the Divvy van, knowing that while the police had treated us well, there were many in Manus Island and Nauru who have been treated harshly by security guards and police.

So we sat in the watch house, while the wonderful police officers promptly filled out the paperwork and processed us, knowing that there still has not been one asylum seeker claim that has been processed on Manus Island.

Aside – My Love Makes A Way Action

I feel, at this point, that I need to step aside and clarify a few things that may have been raised in your mind. Firstly, this action has been a long time coming. I have been preparing myself for this action for over a year, and planning for this action started in April. I also sought, and received, approval and support to take part in this from both the Territorial Commander and the Divisional Commander. So I didn’t act on this alone, but with the approval and support of leadership. You may wonder why I hadn’t mentioned that I was intending to take this action. Part of it is that it is kept confidential, so as not to alert the senator and his office prior to the action. Another part is that it helps gain discussion throughout the community and social media, with people surprised that it is happening. This is a vital part to continue the discussion, as we aim to not only change the policy, but also to change the discussion within the community and within the church. And while we weren’t able to change the policy in this action, we are still able to change the discussion in the community and in the church. So feel free to come up and chat with me about anything relating to Asylum Seekers if you have any questions.

There are people in this world who are oppressed

The reality is that in our world today, there are many people who are oppressed. They are oppressed by people who have power. They have their rights taken away from them by people who have power. They could be asylum seekers seeking safety from war-torn countries. They could be the disabled, facing uncertainty about the level of support by a government intent on reducing our welfare bill. They could be Aboriginals, being pushed out of their traditional lands. That’s just a few situations that are happening right here in Australia, but there are thousands more all around the world. And quite often, people in those situations will think that they have no hope. How can they possibly change the world – they are, after all, just one person.

But that’s exactly what Jesus was teaching right here in this passage. Jesus was giving those people who were oppressed the opportunity to be seen as an equal. To give them some power back. How? Let me show you.

First, I need a volunteer. Now, back in Jesus’ day, there were very strict rules as to what you would do with your hands. One of the things is that you would only ever slap someone with your right hand. So, please put your left hand behind your back. Now, there are two ways to slap someone. Open handed, or back-handed. Now, Open handed slaps, they were for men of equal standing. Think of those days of old, or possibly in the movies, where someone would challenge another to a duel by slapping them. But a back-handed slap, that was for someone who was lower than you – a master slapping his slave for example.

So if you were only to use your right hand while slapping, and you were going to slap me on the right cheek, would you have to do it open-handed or back-handed? And this would be known by the crowd – if someone slapped you on the right cheek, it was because someone saw you as less than them. However, if you then turned the other cheek, forcing them to hit you on the left cheek – there was only two options for them. To slap you again, this time with an open hand, signifying you as equal, or to walk away, surrendering their position. In this way, Jesus was able to put power back into the hands of the powerless.

In the same way, if someone was suing you to take your coat – it was only because you had nothing else left to give. For someone to sue you for your coat means that they are so insistent on damaging you that they will take everything that you have. The cloak – that was effectively their last layer of clothing, it was the only thing giving them any dignity. So when Jesus says, give them your cloak, he was effectively saying for them to disrobe, to get naked. Why? Because it gave the powerless a voice. It was allowing the person being sued an opportunity to say to the oppressor, “look at what you are doing to me. You have reduced me to this – that I have no dignity left.” And by doing that, it forces the oppressor to think about what he is doing – to be the person that left someone naked (and lose standing in the community), or to give up his claim on the other person. Again, Jesus was putting power back into the hands of the powerless.

The final example Jesus gives is going the second mile. Now, we know that the Romans were occupying Israel at the time, and a Centurion was able to conscript a Jewish person to carry their pack for them, but only for the distance of one mile, no more. If it was carried further, then the Centurion was able to get in quite serious trouble. So if a Jew was to get to that one mile mark, and to just keep on walking, the Centurion would be running behind them, pleading with them to put the pack down. And with that, the power has once again gone from the powerful to the powerless.

Jesus gives us dignity through our choices

This is what Jesus was hoping to achieve through this. He wanted to give power to the powerless. To give them a dignity in life. And he offers that same dignity to us as well. It’s unlikely that you will be slapped in today’s age, and our understanding of position and customs are different from what they were back then. Taking off your cloak will not have the same effect that it did in Jesus’ day. And there aren’t any Roman Centurions around to force us to carry their packs. But through what Jesus is saying here, we can take his message and apply it to our own lives. In every situation, we have a choice on how we act. We can choose to act and show love to all people. We can choose to treat all people as equals. And we can choose to stand up and be a voice for those whose voices are oppressed by people in power. In Proverbs 31:8-9 it reads “Speak out for those who cannot speak, for the rights of all the destitute. Speak out, judge righteously, defend the rights of the poor and needy.” This is what God is all about – because we are all God’s creation, and we are all created equally in God’s image.

Go, love your neighbour, and all others

That same love that God shows us, he calls us to love each other. Because if God shows it to us, and we are all created equal, then we should show it to all others as well. So we need to Go out from our building here, and show love to all people that we meet. We need to give love and dignity to all people that we come in contact with, because that’s what God gives us. And whether we are the powerful or we are the powerless, we need to treat all people as equals.

As we do that, you are invited to join in this song that says “God of the Poor, friend of the weak, give us compassion we pray. Melt our cold hearts, let tears fall like rain. Come, change our love from a spark to a flame.”