As has been my tradition, every sermon that I preach will be posted here. This sermon, Part of our World, was given at The Salvation Army Rochester on Sunday 5 March, 2017. The Reading was Matthew 4:1-11.

So I thought to search up and see if there was anything special about the number 90. Now, numerologically, it would make sense for it to be there. This is the idea that certain numbers, due to the way they are made up, have added significance. So for 90 – you could argue that it’s very special because it is 3 times 3 (Three is significant because of the Trinity) times 10 (10 commandments). However, I could only find two significant mentions of 90 exactly. One comes in Ezekiel 41:12 – where Ezekiel describes the depth of the third temple as 90 cubits. The second reference comes from Genesis 5:9, where it says that Enosh was ninety years old when he became the father of Kenan. Now, I’m not suggesting anything with that reference, just that it was the only reference to an exact ninety year old that I could find. 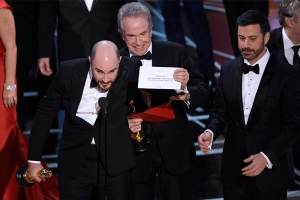 Did anyone watch the Oscars on Monday? What an ending! You couldn’t have written it! I didn’t watch it, as I was busy working on this sermon, but I certainly read all about it and heard all about it. You just can’t believe it – it would be like me coming out and saying, “Sorry Ray, but we got your birth certificate wrong, and you’re actually only 89.” But I do like to keep an eye out for the movies that are on, what’s good, what I should head out and see, and what I should perhaps wait for it to come on Netflix. There aren’t many movies that Liesl and I agree on – she likes her Rom Coms, where as I like my action and sci fi. She would quite happily go and see the next Hugh Grant movie, but she would be just as likely to get me there as I would in getting her to the next Star Wars movie. But there is one type of film that we both like, and that’s Disney. We’re looking forward to the new Beauty and the Beast adaptation, and while I was trying to get my head into the text, Liesl and Annabelle were watching The Little Mermaid.

And as I was trying not to listen and get distracted, the final sung lines of the movie, the big finish, caught my ears. The Little Mermaid and her prince have just got married, the boat sails off into the sunset, and we hear the choir sing “Now we can walk, now we can run, now we can stay all day in the sun. Just you and me, and I can be Part of your world.”

And you’re probably wondering if I’ve gone loopy – what on earth does this have to do with Jesus being tempted in the desert.

Well, before I answer that, I want to remind you what comes just before this reading. Just before Jesus is cast out into the wilderness, we have him getting baptised, and we get this incredible declaration from God saying that Jesus is the son of God.

This raises some significant questions about the identity of Jesus. See, while we know, from Matthew’s account that Jesus was born of Mary, and that Joseph had nothing to do with it – the rest of the community believed that Jesus was Joseph’s son. While we call him Jesus Christ, his name in his community would have been Jesus bar Joseph – that is, Jesus, son of Joseph. Which of course makes it interesting that come Good Friday, we see Jesus offered up for Jesus Barabbas, or Jesus Son of Abbas which means Father.But we’ll come to that another day.

So Jesus, son of Joseph, is baptised by John, and we hear that he is the Son of God. So who, or what is Jesus?

And this is the main question that is posed by the devil in this temptation in the wilderness. Jesus is being questioned – Are you really the Son of God? Just like how the devil queried Adam and Eve by saying “Did God really say that you would die if you ate the apple”, He casts doubt on what God has declared. He tests Jesus for his belief and understanding of God’s word. And it. Is in this questioning that we discover that Jesus is – as the Little Mermaid song sings – Part of our world.

Jesus shows that he is “part of our world”

He starts by questioning Jesus about his humanity. Jesus had been fasting for 40 days. Now, I don’t know about you, but I know I can barely function if I don’t have breakfast every day. So after 40 days, I’m guessing Jesus would have been pretty hungry. But the devil’s words are telling – he asks him to turn the stones into loaves of bread. Not only is Jesus asked to follow the devil’s leading, but he is asked to create more bread than what would have been needed. Instead, Jesus declares that he follows God’s word, and will rely on God to provide his daily bread.

The devil, being rebuffed by scripture, decides to test Jesus’ belief in scripture, quoting from the Psalms to say that God’s angels will protect him if he jumps off the top of the Temple. But Jesus responds again with scripture, affirming the place of scripture and God.

Finally, the devil takes Jesus to a mountain and makes his most ambitious claim. He offers Jesus all the kingdoms of the world – as if they are his to offer – if he would bow down and worship him. At this, Jesus has had enough, and dismisses Satan, saying that we are only to worship God.

Though he refuses to turn stones into bread, Jesus feeds the multitudes in the wilderness with just a few loaves and fishes, and teaches his disciples to ask God for their daily bread.

Though he refuses the protection the Angels would provide, he endures the taunts of others, and trusts God’s power while crucified on the cross.

Though he refuses the Devil’s offer of all the kingdoms of the world, Jesus instead offers the kingdom of heaven to all who follow him.

These things – food, protection, power – there’s nothing bad  in and of themselves. But what is important is where we seek these things from, and where we place the glory.

Because God came down in human form, God chose to experience life as we live it. And Jesus, through his tempting, has already gone ahead of everything that we might face. At the end of Matthew’s Gospel, Jesus tells his disciples that he will be “with you always, even to the end of the age.” Jesus has gone before us, even to the most forsaken parts of the wilderness. There is nowhere “so desolate, so distant, or so challenging” that we can go that Jesus has not already been. So no matter where we are called to go, no matter where the spirit guides us, no matter who we are asked to talk to, Jesus has gone before us.

Be confident in where we step out in faith

Do you believe that? It can be hard sometimes – stepping out in faith means overcoming so many voices in our heads that tell us no. Has anyone seen Indiana Jones and the Last Crusade? It’s a great movie. There’s one scene, where Indiana is trying to find his way through the various traps to get to the Chalice from the last supper. There’s one part where he gets to a huge chasm, with no way to jump it. The clue that was given is “Only in the leap from the lion’s head will he prove his worth.” Despite all his senses telling him it was impossible, Indy realises it’s a leap of faith, and summons up all his faith, and steps out – to discover that it was a perfectly disguised bridge that blended in with the opposite wall. When we step out in faith, we have to overcome the voices that tell us that it’s impossible – because we remember that Christ has been there before us, and nothing is impossible through Christ Jesus.

If that is your desire, then I invite you to honour Christ this day. You might like to come forward and spend some time in prayer. Maybe this is the first time you’ve felt that need to  step out in faith and give all you have to follow Christ. You might like to come and pray the words of this song, which says “Lord, I give you my heart, I give you my soul, I live for you alone. Every breath that I take, every moment I’m awake, Lord, have your way in me.” And whether it’s the first time, or the 50th time, all are welcome to make this prayer.

Or maybe you would like to spend some time in prayer, asking for confidence to take that step of faith. Maybe there’s someone who the spirit has been nudging you to share your faith with. Maybe the spirit has been preparing you, and you’re ready to say “This is my desire to honour you, Lord, with all my heart” and ask for God’s Holy Spirit to guide you as you seek to share God’s amazing love.

Or maybe you would like to come and pray for something else that has been on your heart, seeking guidance from Christ, knowing that he has gone before you in all things.

This time is yours, it is open as you need it. As we sing this song, may the holy spirit rest on you, and may we hear the spirit’s guidance in all things.