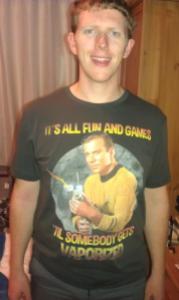 I think it’s no real secret that I’m a bit of a nerd. I’ve talked a bit about being a Theology nerd before, but that’s not the only thing I’m nerdy about. I love Star Trek. I love it, and I’m proud of it. I’m very much enjoying the new series on Netflix, Star Trek Discovery, and Liesl is ashamed that not only am I watching Star Trek, but I’m also watching a show that discusses the latest episode, called AfterTrek. I do love my Star Trek, but

I also love Star Wars and am really looking forward to new movie coming out in December. Before Episode VII came out, I invited friends over and we watched all six movies in one night – not sure I’ll do that again, but it was good.

I’m reminded of a scene in Episode VI, The Return of the Jedi. The Rebels have found the location of the new death star, apparently still under construction, and decide to attack it before it is operational. And in this scene, we have a line from Admiral Ackbar – who is the large orange-brown alien that looks a bit like a large prawn – and this line in recent years has gone on to have a cult following of it’s own.

It’s a Trap! Those three words formed the basis of an internet meme that would produce many other images – it’s just what happens when the internet takes hold of something.

But what this would generally be used for is if on a discussion forum, someone post it to warn of a bait and switch, that is, where someone says this is a link to some particular thing, but in fact, it’s a link to something else. So this image would be posted to warn others.

And I’m thinking of this in connection to my relationship with the media. I love the media, and am quite happy to help them out with a comment where appropriate. However, I’m also very sceptical of the media. It might seem that we have a common aim – to comment on various stories. However, while my aim might be to share God’s love through my comments, the media’s aim is always to sell copies, and the more controversy the better. So there are certain topics that they’ll approach me on that I’ll immediately think: It’s a Trap!

For example, last year, all the ministers were approached to write a piece on what Christmas means for them. As Rusty was coming around to take our photos, he also thought to ask us some questions on another story he was writing, on Voluntary Euthanasia… It’s a Trap! Now, I was fairly certain what The Salvation Army’s official position was, but that is one issue that I can see biblical arguments on both sides, and I honestly don’t know what side I stand on. Any hesitation on my part could be misinterpreted and drummed up to create controversy. So instead, I decline to comment and direct them to our divisional PR rep. So whenever you see “Lt. Ben Clapton from the Salvation Army declined to comment” – that’s one of those Traps.

The question Jesus is asked today is similar in nature. The Pharisees wanted to trap Jesus, and thought this question would be ideal. But they didn’t want to trap themselves, so instead they sent their disciples and the Herodians. And the question seems fairly straight forward: is it lawful to pay tax to the emperor or not? Now, we all know that Caesar had Israel under occupation and required those living in the land to pay tax to the Roman Empire. The tax could only be paid with the Roman coins, which much like our own coins of today, had a picture of the head of state on one side. And the Jews didn’t like this, because it was illegal to make an image of someone. So in order to pay the tax, they had to break their own religious code.

But the Pharisees knew that this was a dangerous question, with no correct answer, or so they thought. You see, if Jesus had said, “No, you shouldn’t pay the tax”, then the Romans would almost certainly have arrested him and taken him off much sooner than they did. However, if he said “Yes, you should pay the tax”, then he would have upset the crowds following him, who didn’t like having to pay the tax.

Instead, Jesus asks these religious people to show him the coin used for paying the tax. Seeing as they have the coin on them, it shows their hypocrisy – they carry around the coin, they break the religious law they hold so very dear. And after they confirm that it’s Caesar’s image on the coin, Jesus instructs them: “Well, if it’s got his image on it, then it must be his coin. Give it back to him.” and then he challenges the crowd with this line: “and to God the things that are God’s” – or in the context of giving to Caesar the thing that bear Caesar’s image, “Give to God the things that bear God’s image.”

Whose image do we bear? 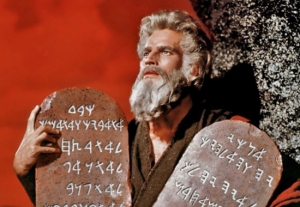 Alright, that’s fair enough. Makes enough sense. But, as I’ve already said, the Jews held to a religious code that said that they shouldn’t make images of people. And they especially held to the second commandment, which we read in Exodus 20:4:

You shall not make for yourself an idol, whether in the form of anything that is in heaven above, or that is on the earth beneath, or that is in the water under the earth. 5 You shall not bow down to them or worship them; for I the LORD your God am a jealous God, punishing children for the iniquity of parents, to the third and the fourth generation of those who reject me, 6 but showing steadfast love to the thousandth generation of those who love me and keep my commandments.

So if they didn’t have anything that bore God’s image, what is Jesus talking about? What is Jesus saying they need to give to God?

Well, to answer that, we need to go back to Genesis 1:

And that’s why the Pharisee’s disciples and the Herodians went away amazed and disappointed, because Jesus answered in a way that avoided their trap – he dismissed their concerns, told them what to do with the coin they so hypocritically held, and told the whole crowd to aim higher by devoting their whole bodies to God.

I guess the problem today is that our image of God is so battered, so bruised, so covered, that no-one knows where it is. It’s like looking in a shattered mirror – you might be able to work out parts of the image, but not the whole. When someone asks what you did on the weekend, do you tell them that you went to church? Do you talk about how God is making a difference in your life? Are you helping others to see where God is in their lives?

We bear the image of God

Each one of us bears the image of God. And Jesus tells us that we are to give our all back to God. We need to ensure that we allow God to use us to share God’s love for all people, who are after all also created in God’s image.

Others will see the image of God in them

That’s what Jesus was trying to tell the Pharisees. Stop worrying about these little things. Instead, focus on your whole being – God created all of you, so give all of you back to God. Reflect God in everything you do. Because when you value others, when you show them the God that is already in their life, whether they recognise it or not, you open up the possibility for them to be God bearers themselves.

Go and bear the image of God in your life 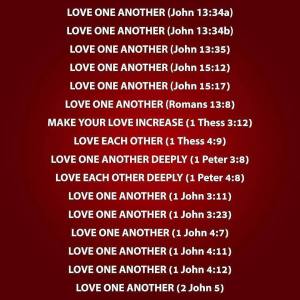 So Go and be God’s image in your life. Follow God’s commandments. Love God with everything that you are, and love others with that same love. In John 13:34, we hear Jesus give a new commandment, that we love one another. He continues saying “Just as I have loved you, you also should love one another.”. In the next verse, he says “By this everyone will know that you are my disciples, if you have love for one another.” Later in John, Jesus reiterates: “This is my commandment, that you love one another as I have loved you.” (John 15:12). And in verse 17, we are given the commandments “so that you may love one another.” In Romans 13, Paul sums up all of the commandment with this word: love your neighbour as yourself.” And again, and again through scriptures, we are taught to love each other. To love our neighbour. This is how we show God’s image: by showing love. If a word is hurtful, then it is not loving. It is not bearing God’s image. Show love. Reflect God’s love for all people.

Scroll Up
%d bloggers like this:
We use cookies to ensure that we give you the best experience on our website. If you continue to use this site we will assume that you are happy with it.Ok