Of course, this year was somewhat different. This was the first year we have had one Victorian Division. In past years, there would be a fellowship for each division – so last year, there was a retreat for officers in Western Victoria Division, Eastern Victoria Division, Central Victorian Division and the State Social Command. This year, all of those came into one – with the result being 178 officers in attendance. So it was massive. END_OF_DOCUMENT_TOKEN_TO_BE_REPLACED

As has been my tradition, every sermon that I preach will be posted here. This sermon, Come Away to a Deserted Place, was given at The Salvation Army Rochester on Sunday July 22, 2018. The Reading was Mark 6:30-34, 53-56.

The many things we need to do

What’s your standard response to the question, “How are you?” Do you say “I’m Good” or “I’m Well”, or “Fine” or something else? In a couple of weeks, Liesl and I will be at Officer’s Fellowship, which will be the first one for the whole of Victoria division. Apart from being much larger than normal, and fairly crazy as a result, I suspect that with a number of catch ups, there will be the question asked “How are you” and more than a few responses of “I’m Busy.”

In today’s society, “Busy” is almost becoming a default response. Our default responses are the way that we want to be seen. How often have you responded “I’m Well” when you have a cold? And as such, “Busy” is seen as something we want to be. If we are busy, we have many things on the go. If we’re busy, we’re doing lots of things. “Busy” seems to be the ideal, much better than “oh, nothing much” END_OF_DOCUMENT_TOKEN_TO_BE_REPLACED

As has been my tradition, every sermon that I preach will be posted here. This sermon, Grace Through our Weakness, was given at The Salvation Army Rochester on Sunday July 8, 2018. The Reading was 2 Corinthians 12:2-10.

Who here is celebrating a birthday today? No one? Are you sure? I have a list of Birthdays here, let me see who’s on it.

Well, I don’t have everyone, but you get the idea – we are all celebrating a birthday, because every day is another day since our birth. I heard someone once say that today is the oldest you have ever been, AND it is also the youngest you will ever be again. I don’t know whether that’s a good or a bad thing to realise, but it’s true. END_OF_DOCUMENT_TOKEN_TO_BE_REPLACED

END_OF_DOCUMENT_TOKEN_TO_BE_REPLACED

For example, watching The Original Series today with modern eyes is slightly jarring. The role of women in the series is often portrayed as helpless, or as administrative assistants, which did reflect the role of women in the 60’s when the show was produced. While the men wore a uniform fit for work and battle, the women were often in very short skirts. If it was made like this today, it would be decried as out of date and out of touch. END_OF_DOCUMENT_TOKEN_TO_BE_REPLACED

But there is one thing that we have improved upon what God created. END_OF_DOCUMENT_TOKEN_TO_BE_REPLACED

Elizabeth Ballard of Chesapeake, Virginia, tells the story of a school teacher named Miss Jean Thompson.
Miss Thompson would greet her new students every September with the same words: “Boys and girls, I love you all the same. I have no favourites.” Of course, she wasn’t being completely truthful. Teachers do have favourites and what’s worse, they sometimes have students they just don’t like.
Teddy Stallard was one of these. END_OF_DOCUMENT_TOKEN_TO_BE_REPLACED

Over to our right, the news crews stand in readiness, ready to interview a range of politicians as they discuss this latest budget. And in front of us, a banquet table, jam-packed full of goodies to illustrate how the blessings of our abundance means that we have plenty to share with all who need it. END_OF_DOCUMENT_TOKEN_TO_BE_REPLACED

Steve Rogers was always fighting… and always losing. He was a short, scrawny little kid, who tried to enlist in the United States Army after being appalled at Nazi Germany’s horrific atrocities. However, because of his diminutive size, he failed to pass the physical requirements. His frustration and desire to serve attracted the interest of one Professor Abraham Erskine. He convinced Steve to sign up for a program he was involved in called Operation: Rebirth, which would enhance US soldiers to physical perfection through injecting and ingesting a “Super Soldier Serum” and controlled bursts of “Vita Rays”, which left Steve a perfect 6’2 and 220lbs, with very high intelligence, agility, strength, speed, endurance and reaction time. This scrawny little kid – the most unlikely of heroes, became Captain America, the first avenger and the group’s long time leader. END_OF_DOCUMENT_TOKEN_TO_BE_REPLACED 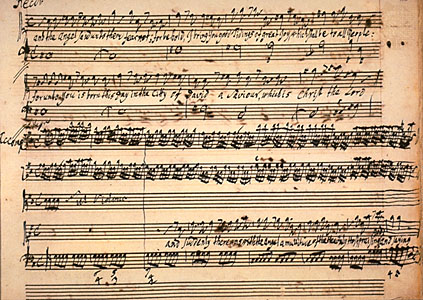 On Friday April 13, 1742, some 275 years ago, Handel’s Messiah oratorio was first performed in Dublin, Ireland. This was a performance arranged by Handel in order to benefit three charities, one of which was Prisoners’ debt relief. The concert raised 400 pounds, giving each charity 127 pounds which allowed 142 prisoners to be released of their debts. END_OF_DOCUMENT_TOKEN_TO_BE_REPLACED